Chang Quan (literally: Long Fist) is the name generally used for the styles taught by Zhao Kuan Yin, the first emperor of Sung dynasty (A.D. 960-1279). Because Zhao once learned martial arts in the Shaolin Temple, and was renowned for his staff-fighting skills during his conquest, his followers called the styles he taught “Zhang Quan” (Zhang and Chang are two different pronunciations of the Chinese character ), which means, “The way of fist fighting taught by the Leader”. Later, two Chinese characters pronounced as Chang were used to mean long or often, and these may denote this styles long reach and wide influence, or mean that it was practiced often. 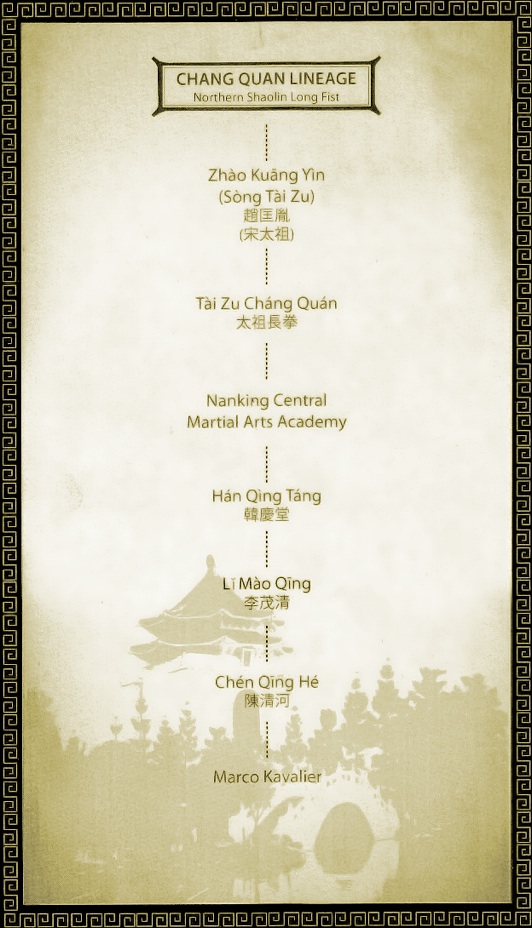 Because there came to be a great number of practitioners of this style, its influence spread and it eventually returned to the Shaolin Temple, where it became known as the Chang Quan Style or the Tai Zhu Style (Tai Zhu means “The Grand Forefather”).

The popularity of the style in the Ming dynasty (1368-1644) can be gleaned from a passage in Ji Shiao Shin Shu, a famous military guidebook written by Chi Ji Guang (1528-1587), the most legendary general of this dynasty, who organized effective coastal defenses against raging Japanese pirates:

As for the famous martial artists and their styles, whether past or present, there is the thirty-two moves style Chang Quan from Sung Tai Zhu, also called Tai Zhu Chang Quan.

This is the origin of the Chang Quan we are teaching here.

The second way of interpreting Chang Quan is to consider its name as reflective of its combat techniques. The distinction between long fist and short fistwas used like an old ad in the Ming dynasty and refers to the range from which the practitioners would strike. Generally, four northern styles are considered the typical constituents of Long Fist because these styles generally strike from as far as possible and practitioners extend their bodies widely in their moves while utilizing swift and forceful strikes. The four styles are Cha Quan (Chais a family name of Muslim origin), Hua Quan (Hua is a family name), Pao Quan (Cannon Fist) and Hong (Red) Quan. A major concept held by their practitioners is “An inch longer, an inch stronger.”

The third possible interpretation of Chang Quan refers to the new style Hsin Wushu (literally: “new” martial art), established by official endeavor in mainland China relatively recently. This style was created by government officials and incorporates the characteristics of the four styles of long fist mentioned earlier, mixing the external aspects of martial art movements and gymnastic leaps and balances into one new form. The purpose for this official form was to standardize the forms so the performances could be evaluated in contests. Because of the great emphasis on muscle strength, flexibility and leaping, this form is mostly suitable only for younger athletes, unlike traditional martial arts.

The most distinctive characteristics of Chang Quan would be its far-reaching and wide-sweeping strikes, its emphasis on extending the body, its distinct, orderly moves that are both simple and concise, its balanced emphasis on hand and foot techniques, and its high combat effectiveness.

The combat techniques can be classified into four areas:

(i) precision strikes on acupuncture points,

When practiced, Qang Chuan should look like raging waves on a great river that follow one another endlessly, allowing for no weak points. By coordinating the hands, the eyes, the body and the steps, we may achieve such requirements as Fists swift as falling stars, Waist flexible as slithering snakes, Steps gliding lightly without lifting and falling as if glued to the ground. The major hand shapes are fists, palms, hook hands and claws.

The eight major stances are:

As an old saying goes:

Move as the tide raging, Still as the mountain resting, Rise as the monkey leaping, Fall as the sparrow alighting, Balance as the rooster on one foot, Stand as the pine with deep roots, Turn as the wheel in a spin, Bend as the bow on tight strings, Light as the leaf drifting, Heavy as iron sinking, Slow as the eagle gliding, Swift as the zephyr sweeping?

Quan’s movements are natural and its strikes are all smooth and fluid. When practicing it, the basics are heavily emphasized. Proper relaxing of the various joints, the flowing and sinking of Chi, understanding the concept of controlling the center line, coordinating the joints and accurate movements are all vital to sound learning progress. It is said, “Even great towers began on flat grounds”.

In learning Chang Quan, the training stages must not be ignored or nothing shall be achieved. In our training, Tao, morality and skill go hand in hand. All goals of strengthening, defending, mental training and health promotion should be pursued at the same time.