My goal in writing this article is to try and highlight some of the important underlying principles that Master Chen discussed during the Dui Da classes.

It is important to know that all the principles of traditional Wushu should remain intact when sparring with a partner. To think that form techniques have no use during sparring means incorrect understanding of the movements. This article will discuss several fundamental principles and their relevance when sparring.

Our basic posture or ready position has the centre of gravity mostly on the rear leg so that is furthest from our opponent and less vulnerable to being pulled or swept. If the leg closest to the opponent carries less weight then it can be more easily lifted to kick with. The stance that suits these criteria well is San Jiao Ma or triangle stance. The rear foot has about 70% of the weight and the front foot has 30%.

To achieve control of the centre of gravity we must pay attention to the Dantain, Kua and posture. The Dantian should be drawn in and held stable so that it forms the central hub for all forces in the body. Opening the Kua and stretching the lower torso taller allows the stepping to be lighter and more sensitive to changes in balance. Keeping the whole spine upright is vital to keeping the centre of gravity controlled. Tension in the shoulders and expanding the ribs and chest will cause the body to become top heavy and hence unstable. The legs and Daitian at the base of the body should be relied on for power instead of the shoulders. This is the foundation for good upright posture that is essential or agile movement and generating force while sparring.

The principle of centre line is probably the single most important idea in Wushu. Our basic ready stance should be balanced around the vertical central axis of the body. Most styles of Wushu also stipulate that the central axis of the body must be kept vertical at all times no matter how low or high the posture is. This is an important principle to keep in mind for sparring because it helps keep the body balanced, helps us generate power and keeps the head protected.

Whenever the body rotates it should be on the central axis. Most turning hand and leg movements are more efficiently done using a very small movement with the limbs accompanied by rotation of the body on its centreline. The surprising truth is that turning the whole body on its centre is much quicker than keeping the body still and moving the limbs on their own. So if we use the rotation of the body our blocks and strikes will be much faster and more powerful.

Turning of the body gives us a way to convert and redirect incoming force from an opponent and send it back at them. As an opponent strikes at us we reach out and stick to their strike with our one hand blocking or controlling their strike. Simultaneously our other hand strikes back at them. As both arms are driven by the body’s rotation this simultaneous action is possible. As opposed to a block followed by a separate strike which would be much slower. Rotation of the body on the central axis allows us to move efficiently and keep the limbs relaxed. Making use of this concept will allow us to save energy. Otherwise a short session of sparring will leave us exhausted.

3) Line of attack and Strategy

When facing an opponent we should have a clear idea of the direct line between our bodies and our opponents centre. This can be called the line of attack.

Our focus normally is straight down this line. Our eyes, fingertips and the front foot all facing the same way. This represents a well-defended front line to our opponent. It leaves our limbs well aligned for attack and defence, and our senses focused on our opponent.

The strategy of stepping during sparring is to face directly down the line of attack and hence prevent our opponent from doing so. As soon as any contact is made the opponents will compete for alignment down the line of attack. Id on opponent is even slightly off, their power cannot be sent in towards their target as easily. If they are misaligned and continue to exert forward power they are easily deflected like water by the angled hull of a boat. To achieve this relies on our understanding of the Line of attack concept and our stepping being agile, swift and well timed.

There are very few discussions in Wushu that do not mention Dantian. It is seen spatially as the 3 dimensional centre of the body, and also as the central hub via which all force in the body should be channelled. A vital property of the Dantian is thus to be stable and balanced. To achieve this stability the lower section of the body this is cupped partially by the pelvis should always remain drawn in during Wushu practice. When stepping the Dantian controls force from the legs to shift the body to the required new position. If done correctly the stepping should be light and the body should stay tat the same height and remain stable during the transition. We want to keep the body balanced at all times without the weight falling as we step. A good test for this is if the stepping can be silent.

Stability in the hands is also important. A stab le Dantian provides the starting point for extension od the rest of the body and allows the shoulders to relax and open. Our goal is to meet our opponents with defensive arm postures that are stable, but empty. This means that they are free of muscle tension. If our arms are too stiff then an opponent can easily push us over by pressing on them. Our hands should be an intelligent defence that allows us to sense the direction and position of our opponents force and also disguise the nature and position of our force.

5) Don’t use force against force

One of the most important ideas in Wushu is that one should never fight force against force. Bu yao yong li peng. This can also be translated as: Don’t use the collision of force.

We can say that this is the “litmus test” for successful application of Wushu principles. One might feel that this is a very lofty ideal that can never be achieved in the neat of a sparring situation, but in actual fact if we can keep a clean head, this idea can be our sole guiding principle.

When it comes down to instinctive reaction as an opponent’s attacks, the answer to the question “what should I do now”, is answered by the sense of which action will not let our force crash into our opponents force head on.

When facing an opponent in San Jiao Ma, the most efficient way of shifting backwards or forwards as a small shuffle step keeping the San Jiao Ma stance intact. Once one is able to do the basic forward, backward and side step, the strategy of stepping needs to be studied.

When facing an opponent one of the most important principles to be aware of is staying in the desired range from the opponent. This is not to say that being close is good and far is bad, or vice versa. Each range has its benefits and deficits. What is important is that we have the ability to move to the desired range at any moment.

If we first only consider forward and backward stepping alone the line of attack: there are preferred ranges for both attacker and defender. Hand techniques will all be much easier to use of the basic stepping and range is well executed. Poor stepping will always leave us vulnerable to attack and unable to generate power in our strikes.

If an opponent steps forward and tries to hit us we can use a reverse step to protect against the attack and neutralise the opponents force. The ideal reverse step would take our body just out of range of the attack, but no further, making counter-attack much easier. Our body can end up less than 1 centimetre away from the opponent’s fist, but because the retreat was well timed out body is not harmed in any way. The opponent has reached their maximum extension and is hence vulnerable to counter attack. To achieve this desired effect our stepping needs to be agile, swift and light. Our retreat should match the pace of the strike rather than being too fast or too slow.

From the perspective of the attacker, one’s stepping should be able to close the distance to the opponent, and bring them in range for attack. The stepping however, cannot just be quick and long. It needs to also be stable. If we charge forward unbalanced out opponent can easily side step and make us fall forwards. If we are unstable our power falls downwards to the feet with each step. Heavy footsteps are an indication of this.

When sparring it is very important to keep our mental state focused, but calm. Just as the body should remain relaxed to conserve energy and move swiftly, similarly with the mental state. If we are overcome by fear  or panic then our ability to react quickly in defence and attack is lessened. Frantic action will cloud our mind and reduce our ability to instinctively choose the correct course of action. We should keep our intention centred and undistracted, and our vision focused on the opponent. An aid in keeping the mind and body calm is to keep the breathing even.

The above sections have highlighted a few points of traditional Wushu and their relevance to sparring. Posture and body alignment are very important. To be aware of the centre of gravity and how to prorect it is essential in both sparring and wrestling situations. The concept of centreline should  be focused on until it becomes a natural instinct to keep the vertical axis upright. It is the ey to good movement and power generation. The competition for control of the line of attack between us and our opponent is the most vital point to be aware of for manoeuvring and strategy of sparring. The basic sparring posture should offer the opponent the least opportunity to attack vital areas of the body, and most importantly keep the front centreline of the body guarded. The body should stay stable, balanced and relaxed to conserve energy and allow for swift movements. Instances of colliding with the opponent force and using too much muscular effort should be avoided. Keeping the body relaxed, the mind calm and the breathing steady and even are all key points in keeping the mental intention and focus unclouded.

An analogy that is often used by Lao shi to summarise the nature of good Wushu practice is:

This is a core underlying principle that we should try and infuse all our Wushu practice with. 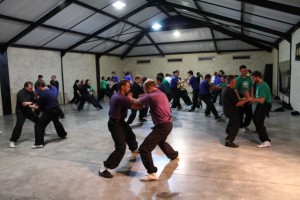