Taiji: An Introduction for Beginners

What is Taiji?  Taiji is classified as an internal martial arts system. There is plenty of literature available about the philosophy behind this amazing art form, so I will not go into those details in this article. That aside, there are so many other aspects that need to be discussed, but my idea here is to write a beginners guide to Taiji, and not a book. To this end I am any going to focus on certain aspects of training at I feel need to be discussed, more to follow at another time. 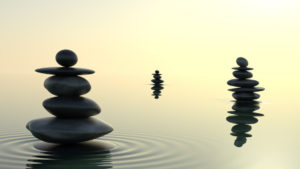 The focus of Taiji is unity and harmony

Taiji aims to achieve relaxation in the body which allows for the entire body to work as a unit. By performing the movements slowly the student’s body will start to move in a harmonious and unified way. This way of moving will allow the student to produce a more efficient power from within the body. When I say ‘power’, this refers to an extremely fine-tuned physical result. Teaching the body to become unified is not easy, it is a long process and requires patience and endless hours of training. The requirement of performing the movements of the forms slowly allows the student to be aware of their body and enables the student to make the necessary physical adjustments.  These adjustments include the fine tuning of each technique and just as importantly, if not, more importantly, to enable the student to relax the body and mentally connect the various parts of the body. Relaxing the body is an important focus in Taiji training, one that I will go into more in the section below. Relaxing and moving slowly also develops and heightens the sensitivity of the body and mind. The primary result of effective training in this manner is the fine tuning of bodies mechanics.  Second to this is the development of Qi within the body.

Words that describe what Taiji is; controlled, slow, smooth, fluid, open and relaxed.

Words that describe what Taiji is not; rigid, closed, erratic and uncomfortable.

The most important qualities to have whilst training are awareness and feeling/sensitivity.

The joints of the body need to be open/relax, so no acute angles in the elbows and wrists.

The body must always be upright and relaxed – no tension, and also no collapsing.

The correct posture is important, it must be correct but not strained.

Shoulders should be relaxed and elbows soft, waist and torso relaxed and chest sunk/relaxed.

Taiji requires all parts of the body to be linked together and to move as one whole. As a new student of Taiji, you have to learn how to move slowly and in a controlled manner, which is far more difficult than it sounds. 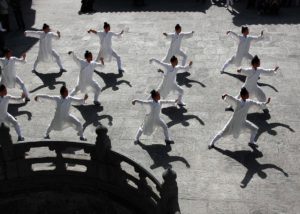 All teachers have their own methods and teaching styles, and they are all different. I start by teaching the basic leg positions, called stances. There are quite a few different stances in Chinese Martial Arts but the beginner student needs to know the 4 primary stances to start their training. So we first focus on the structure of each stance and the coordination of movement from stance to stance.

The movement from stance to stance teaches the student so much about the mechanics of the feet, legs, hips, waist and the joints and the connections between them. By practising these stances and their connecting movements the student will also develop leg strength and a sense of centre.

Below is a brief description of the primary 4 stances:

Ma Bu, known as “horse stance” or “horse-riding stance,” is a fundamental stance found in nearly all styles of Martial Arts. The stance typically begins with the feet a shoulder-width apart. The feet are parallel, straight forward, and the knees are bent at 90 degrees. The torso sinks down as if following a plum line and the sacrum curves forward and in or arches. Equal weighting (50-50) is given to each foot, making for a very stable stance.

Gong Bu translated as “bow stance”, Gong Bu is also known as “Deng San Bu” (mountain-climbing stance) or “Gong Jian Bu” (bow and arrow stance). The lead foot is pointed straight ahead, with the lead leg bent slightly. The trailing foot is angled outward at a 45-degree angle, with the heel lined up with the heel of the leading foot. The trailing leg can be held straight or slightly bent. The result is a “lunging” pose. The given weighting is 70% on the front foot and 30% on the rear. The body is up straight, always relaxed, never slouching.

Si-Liu Bu is the “four-six stance,” used heavily as a transitional stance. It is named for the fact that 40% of the weight is on the leading foot and 60% on the rear foot. The stance is somewhat similar to Deng San Bu, with the exception of the greater weight distribution over the rear leg. The rear knee is either turned inward toward the groin or slightly outward. Whichever direction it points in, it is important for the knee and toe to be pointing in the same direction. The accepted range for the angle of the back foot is between 90 and 45 degrees. The front knee is slightly bent, never straight.

Si-Liu Bu is a highly functional stance that often serves as a standard guard position; it has great utility, allowing the martial artist to initiate nearly any technique in this stance. From Si-Liu Bu, one may switch to any one of the other stances with minimal effort. The stance is highly mobile, used for swiftly stepping forward or backwards, “changing legs,” or leaping to the other side of an opponent.

Xuan Ji Bu is known as the “false” or “empty leg” stance, often also referred to as ‘cat stance’. Xuan Ji Bu is assumed by placing one’s entire body weight on a single leg and hanging the other leg in front to lightly touch the ground, only the front part of the foot resting on the ground – note that in external styles the front leg is extended forward and the contact point is on the top of the toes. Since the front leg has no weight placed on it, it can be used to launch fast kicks and allow for quick movement. It is sometimes used in conjunction with other stances for evasive actions.

Students will gradually become familiar with the leg movements and the structure of the legs and how to move more efficiently. It can take about a month or so of regular training to get the legs used to all the work they have to do.

In the same time as we teach the leg structure we start the focus on the arms and torso. There are many moves that train the torso and the arms to work and link together. The primary concerns are the coordination and correct performance of each technique whilst trying to achieve the Ten Essentials throughout the movement – refer to Part Two (coming soon).

A defence against three muggers
Scroll to top